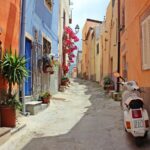 If you’re bored of staying at home by now and starting to dream of far-off places, you might be thinking about bringing some of that holiday feel into your home.  A great place to start is by considering what makes those places feel so beautiful and unique, and bringing some of those elements into your interior design, so for this week’s blog, we thought we’d have a look at five places around Europe, and what makes their design aesthetics so recognisable.

You can’t really talk European décor without starting off in Scandinavia with Scandi design, a minimalist movement defined by simple, functional objects in neutral tones. This is probably the easiest style to emulate in your own home- all you really need is some great storage for your clutter and to reduce the amount of different tones and colours in your décor until you have something that feels cosy and minimalistic. The downside, of course, is that because Scandi design is so popular here it’s less likely to create the holiday feel you might be looking for.

If you’ve seen Tuscany, either in real life or online, you’ll know that its particular charm comes from mixing traditional Mediterranean elements with a rustic, cottagecore feel. They’re also build with an eye towards natural elements and reducing the heat, so you’ll find lots of terracotta touches, exposed brickwork and wood. The colours used are earth tones; warm yellows and greens which complement the surrounding countryside.

Spanish interiors take on a similar style to Italy in being influenced by the surrounding countryside, and you’ll find similar terracotta touches, which help to keep homes cool. You’ll also want to incorporate touches of traditional Spanish crafts- ornate ceramic and carved wooden touches are all common, as well as woven textures.

Where other European countries tend to keep things simple, French interiors are a little more maximalist. In Paris, interiors shy away from looking too curated, preferring that their interiors look a bit less ‘try hard’ and more natural. When rural, they tend to go for bright, clean spaces, with neutral palettes.

German design, which is more similar perhaps to Scandinavian than European design, values simple, clean lines in utilitarian materials. It doesn’t tend to foreground luxury; instead, homes are functional, minimal spaces to rest and relax in.