I am happy to confirm we are now back online with a transactional store. For those that used to work with us, welcome back and for new partners take a look at our store.

We offer the same pricing & promotions as in our physical stores including exclusive products and pre-orders .

We ship to the UK only, offer free delivery on orders over £10 this includes all categories currently on the website including Vinyl,Cd,Blu-ray & Dvd

We will be looking to add some additional ranges later in the year, including Merchandise and a Technology range.

It’s lovely outside, and if you’re reading this, like us, you’re probably sitting inside!
But hey ho, we have some great new deals for you this week at Xtra-vision.co.uk. Which has got to brighten up your day right?

Over 200 titles, mixture of old and new. Includes everything from Interstellar to blasts from the past like The Lego Movie. And to quote the Lego Movie – EVERYTHING IS AWESOME!

For the gamers among you, we have all the top games from E3, at some of the best deals in the UK. And if the price changes after ordering, you’ll only pay the lowest price.

Highlights for us include Fallout 4, Star Wars Battlefront and Fifa 16.

Right now, we have the best deals for Fallout 4, Until Dawn and God of War III: Remastered.

Check out both E3 and all the games coming soon, broken down by month here –

As part of the hmv group, we get all the great music that hmv IE has; here’s a range of chart titles for £6.99 or less. Includes titles like Blur: The Magic Whip, Hozier and Taylor Swift’s album 1989.

Inspired by Columbo. OK. Appreciate that you don’t have all day.

Two new EXCLUSIVE steelbooks, that you should have no problem selling… these things are limited run, highly collectable.
JURASSIC WORLD – EXCLUSIVE STEELBOOK

Jurassic World is the BIGGEST movie of the year, and as part of the hmv group, we have an EXCLUSIVE steelbook. This is already in high demand, we encourage you to go after this one…

41% of Americans surveyed by YouGov said that they believed Dinosaurs and Humans lived side by side. Well, who are we to argue! We have the perfect film for them… and pretty much everyone else!

A bit more of a niche film, best described as a war film in the desert with some alien monsters. The sequel to the indie sci fi classic, and Xtra-vision exclusive from a few years ago.

As always, we’re here to support, to help, to provide whatever you need. We’re looking for valued partners to help us take our value led Xtra-vision.co.uk proposition to the next level – so welcome suggestions. You don’t ask, you won’t get!

Please don’t hesitate to give us a call or drop us a line if you need anything. 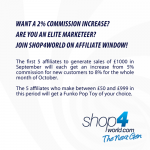 We are an online retailer that specialises in collectibles, clothes, toys, card games, DVD's, board games & video games!

Earn 8% commission this October & the chance to win a Funko Pop! figure!

Our top 5 affiliates this September who generate sales of £1000 will receive an 8% commission rate on new customers all October, that's a 3% increase! If that's a little out of your reach though the top 5 who make between £50 & £999 will win yourselves a Funko Pop! figure of your choice! (measured on sales value) 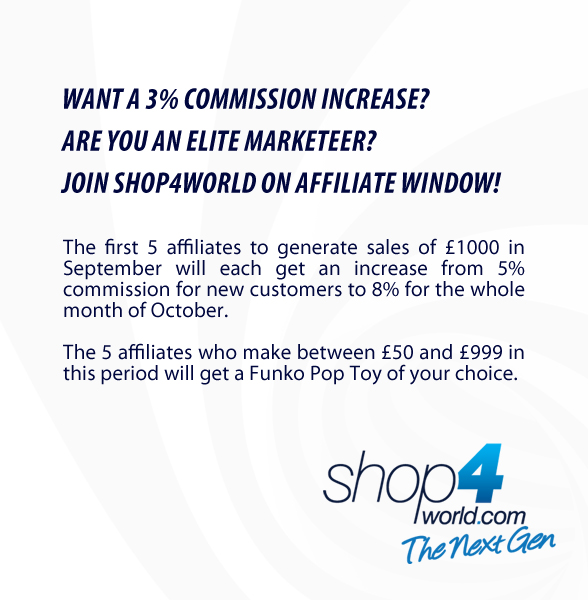