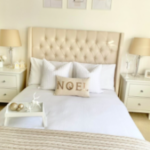 If you’re feeling a change this Christmas, maybe the answer is to challenge yourself to a different decorating style than you’d normally go for. If you’re looking to put down the red-and-gold ornaments you’ve been using for years, and try and challenge yourself to stick to something a little more chic, we’ve got you covered. In the runup to Christmas we’ll be looking at different decorating styles and discussing how to get them done quickly and without breaking the bank.

This week, we’re tackling minimalism, which can be a tricky aesthetic to get right around Christmas- too much decoration and you lose the minimalist feel, but too little kills the festive spirit. However, when done right, a minimalist Christmas strips the season down to just the bits that feel important to you personally. It also has an aesthetic that some people find more relaxing than traditional decorations, making the home seem cosier and less stressful.

A good way to achieve the look is by picking our one or two colours, which complement your existing décor, and sticking to them.  To create a minimalist space, you’ll want to use colours that sit next to each other on the colour wheel, because they’ll create a more relaxing space. For example, if you’ve got a cream bed like this one, you might want to consider adding in greens or golds, which will complement the yellow undertones of the cream.

Another great idea for balancing minimalist décor without becoming dull is to spread it out evenly- rather than concentrating all of your decorations in one room, make sure each room has a few pieces that match. It’s also really helpful to relocate the décor you already had out so that things don’t seem cluttered- if you’ve got an ottoman bed like this one the job is a lot easier, but failing that, make sure to store things somewhere that they won’t get lost or damaged.

Last but not least, there are a few simple pieces that will always look great- warm white string  lights have a huge impact without being over-the-top, as does winter greenery. Whatever you decide to do, remember that the whole point of this tradition is to do things that make you feel happy and festive, and focus on achieving that rather than perfection. 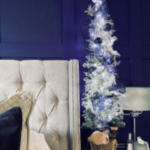 If you’re getting the festive season started at home, then a lockdown film night is the perfect thing for you. Pop some popcorn, find your comfiest pyjamas and curl up in bed (preferably one from our extensive collection) and get stuck into a classic Christmas film. In case you’re stuck for one to watch, we’ve compiled a short list of some of our favourites below.

A young boy who doesn’t believe in Father Christmas gets swept away by a train headed directly for the North Pole in this Christmas classic. Based on the iconic book of the same name, the film deals with what it’s like to lose the magic of Christmas and struggle to find it again.

If you haven’t seen Elf, you haven’t done Christmas. This iconic film about a human being who grows up thinking he’s an elf is the perfect mixture of sweetness and stupidity to make you feel good about the festive season.

This is actually the best film to watch in November, because it kind of bridges Halloween and Christmas, so it’s the perfect way to start your Christmas watching. If you’ve not seen it before, it tells the story of Jack Skellington, the Halloween King who decides he wants to switch to running Christmas.

This is a vintage classic that gets passed over way too often. It’s an adorable story about a little boy who wants his parents to buy him a BB gun for Christmas but can’t convince them to do it.

Kevin McAllister is left to fend for himself when his family forget him and leave for the holidays. Need we say any more?

A Christmas-hating green creature attempts to steal Christmas rather than dealing with his trauma. As funny as it is wholesome, this film deals with what it’s like to get carried away in the materialism and forget what Christmas is about.

Father Christmas has to prove his identity to disbelievers in this 90s classic.

If you’ve got kids, chances are that they’ve had to watch this at school, but nothing ruins the novelty of watching Martin Freeman as an exhausted schoolteacher who accidentally leads the whole town to believe that a Hollywood producer is coming to see their nativity.

9.Olive The Other Reindeer

A niche favourite about a dog named Olive who doesn’t fit in- when Rudolph gets injured and Santa says he needs ‘all of the other reindeer’ Olive mishears and becomes convinced she’s Santa’s only hope.

The Muppets and Dickens sound like two things that absolutely should not go together, but this film weirdly makes it all work, and work well. Worth watching just for Miss Piggy.

This year, Christmas will begin whilst we’re still locked down, and whilst that means we can’t partake in a lot of the traditions we’re used to, it also means we have way more time to decorate, so many people are going all-out with decorations this year. That means that decorations are no longer limited to the living room- this year, people are deciding to make Christmas decorating a whole-home project.

If you’re up for a challenge, try tying all of your indoor decorations together under one common theme or colour scheme- this could be a frosty blue and white, a minimalist white and silver or a bold multicolour. It’ll provide a great project as you try and source the right pieces to make it work- you could even try doing a different theme for every room.

If you’re the sort of person who decorates the outside of their house, congratulations- you’re already winning at Christmas. If you aren’t, but would like to be, you can’t go wrong with fairy lights in any piece of foliage you can find, on walls, and around doorways. If you’d prefer to add a more unique touch, there are plenty of beautiful wreaths and outdoor ornaments you can make or buy.

For bedrooms, the sky is the limit. Forget pleasing all members of the family and just go for the Christmas decorations that make you feel most festive. You could even go as far as getting a small tree to sit on your bedside table. If you have a statement headboard, this is a great way to complement it. If setting up a whole extra tree is too much stress, you can also create a Christmassy feel by adorning your headboard with Christmas lights or hanging a stocking.

Whatever you do, remember that Christmas decorating isn’t about being super stylish or overly-collected; it’s about making memories and creating an atmosphere that feels special. If it isn’t perfection, don’t panic- as long as you enjoy it it’s exactly right