The milestone agreement with Sony Pictures Television is the latest in a line of exclusive content deals announced, including deals with Warner Bros., Entertainment One, STUDIOCANAL, Disney, Momentum and Lionsgate.

LOVEFiLM members will be able to exclusively stream Sony Pictures titles including the Academy Award winning The Social Network, action-thriller Salt, starring Angelina Jolie, and sci-fi action blockbuster 2012 via LOVEFiLM Instant at no extra cost and as part of their existing subscription.

The deal will see Sony Pictures’ recent and forthcoming releases, catalogue titles and TV series added to the LOVEFiLM Instant service – available on the PC or via Sony Playstation®3, Microsoft Xbox 360, Apple iPad® and a growing number of Internet-connected TV sets and Blu-ray players.

Win an Xbox by promoting LOVEFiLM! 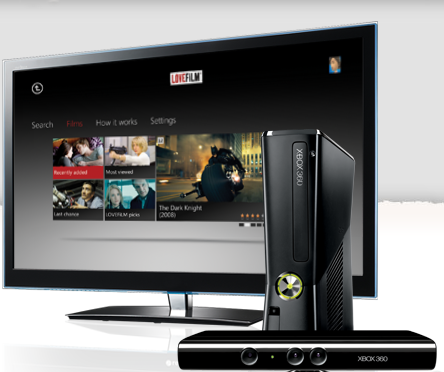 To be in with a chance of winning an Xbox, all you need to do is update any content about the exciting changes at LOVEFiLM and send us a link to it. It could be about the deal with Sony, or the launch of the Xbox app (more info on that below!).

More information on the Xbox 360 app

Millions of users will now be able to watch instantly with LOVEFiLM offering thousands of titles to watch instantly via the app, such as Red, Happy Feet, Splice, The Losers, Twilight: Eclipse and The Ghost.
Exclusive content coming up includes Unknown, starring Liam Neeson, and thriller Source Code, starring Jake Gyllenhaal, plus many more great films like The Hangover, The Dark Knight and lots of films for kids this Christmas.
With Kinect for Xbox 360, users have the ability to effortlessly control the LOVEFiLM Player App through motion, gestures and voice commands. This interactivity will revolutionise the way film fans manage their movie selection and engage with LOVEFiLM.

The Xbox service comes at no extra cost to our customers. Sign up for a normal FREE trial and you will get your usual range of 70,000 titles on DVD, Blu-ray and games, as well as access to watch online via your Xbox 360 (or your iPad, PS3, laptop etc)

Please send all examples of your promotional pages/emails/social media to Tamsin attamsin.isaacs@affiliatewindow.com and we will pick winners at the end of December!

To discuss other ways which you can be promoting LOVEFiLM, please don’t hesitate to get in touch.

We’d like to take this opportunity to thank all of our affiliates for their hard work in promoting us this year and for making this a fantastic year for LOVEFiLM.

Have a wonderful Christmas!