The MUSTO sale is still going strong, with up to 50% off the Spring/ Summer 2013 collections and more lines added.  We're currently offering free delivery with code SALETIME on all orders over £75 at musto.com. 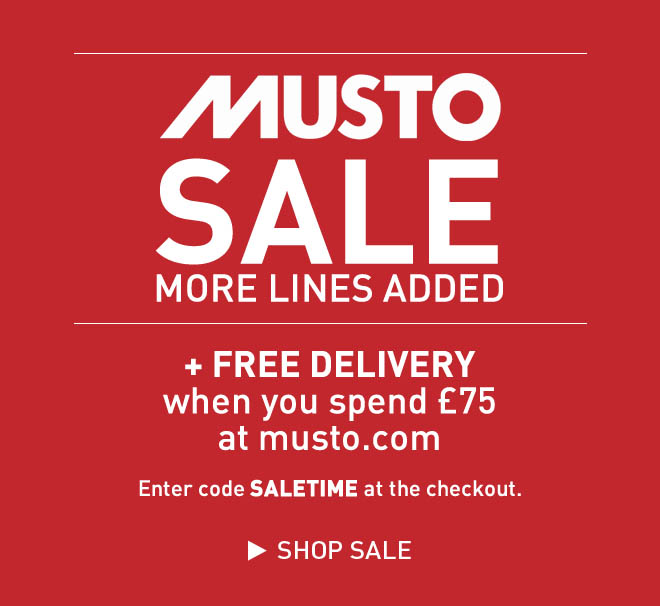 (Free Standard UK and Rest of UK delivery on all sale orders over £75. Valid until 23:59 Sunday 18 August 2013 at musto.com. Not valid in conjunction with any other offer. UK only.)

The MUSTO sale is now online at musto.com and in stores, with up to 50% off the Spring/ Summer 2013 collections.

Please update your sites with our new sale banners (found in the Awin interface) and we’d love for you to feature some sale highlights and favourite products.

To celebrate the sale, we’ve increased commissions for all sales made between Thursday 11 July until 25 July to 12%.

There's still time to buy Father's Day presents - order before 12pm on Friday 14 June 2013 and enter JUSTINTIME at the checkout for free UK Next Day Delivery when you spend £50 or more. Check T&Cs for more information.

MUSTO has been chosen by the Volvo Ocean Race as its official supplier of sailing apparel and footwear for the next edition starting in October 2014. Click here for video announcement.

The Volvo Ocean Race celebrates its 40th birthday in September 2013 and MUSTO’s association with the historic test of sailing skill, teamwork and character goes back as far as the third edition in 1981-82 with winning boat Flyer II. Since then, MUSTO has supplied sailing clothing and waterproof equipment to teams in every edition of the race around the world and the company was official race supplier for the eighth and ninth editions in 2001-02 and 2005-06.

Volvo Ocean Race CEO Knut Frostad said he was delighted to welcome back MUSTO as official partners for 2014-15.

“MUSTO sailing clothing is used across our sport and carries huge respect as the kind of high quality, durable gear needed for an event which has the demands of the Volvo Ocean Race,” Frostad said. “We are returning to a much-loved race partner and I’m delighted that we’ll be working with them once more.”

Nigel Musto commented: “The Volvo Ocean Race has always been part of the MUSTO DNA. Since 1981 it’s been our test track, now a 40,000-mile endurance run not only for the crew and the boats but for our clothing  – a laboratory for all our innovations and a true test of our products.

MUSTO never have designed their foul weather gear from behind a desk, and this new partnership helps us to continue working with the very best offshore crews in the world, clothing designed by sailors, for sailors. It’s going to be a very exciting few years.”

The 12th edition of the Volvo Ocean Race, starting in Alicante on 4 October 2014, will be the first to be raced with a new fleet of one-design boats, designed by Farr Yacht Design in the United States and built by a consortium of boatyards in Italy, France, Switzerland and the United Kingdom.

Unfortunately, musto.com will be closed for a short period of time so tracking will be down. The new site will be up and running tomorrow, please pause any activity on the program if possible.

We will send out an update when it’s back up. We look forward to welcoming you to the new look musto.com shortly!

Apologies for any inconvenience caused. If you have any questions do get in touch with us on the email below.

British clothing brand MUSTO has just launched the mid season sale, with up to 40% off selected menswear and womenswear lines at musto.com. 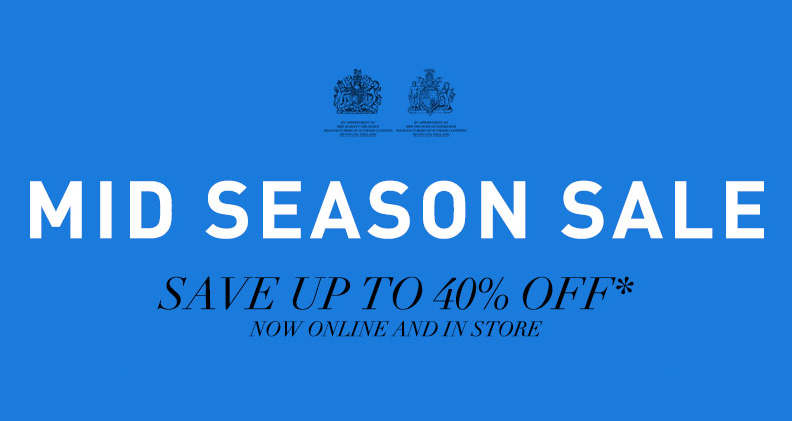 Let us know if you need anything else to promote MUSTO.

Here are the images and product links for the best-selling items from the MUSTO Spring/ Summer 2013 collections:

Snug Blouson, £120
The perennial classic. A winning combination of showerproof outer layer with lightweight warmth from a fleece lining.

Beacon Blouson, £100
Faithful to the original Snug design: showerproof, breathable and high close fitting neckline which makes all the difference when the elements are against you.

Deck Coat, £200
Fast becoming a MUSTO classic, this waterproof, breathable coat is based on a traditional sailing silhouette, brought up-to-date with a modern fit.

Imperia 4 Pocket Jacket, £140
A MUSTO favourite. Showerproof and versatile yet very stylish with a flattering fit.

Lasse Gilet, £75
Contemporary gilet with light soft warm wadding, so is as practical as it is stylish.

Portimao Lightweight Jacket, £120
Inspired by MUSTO's marine heritage, this flattering, showerproof parka is ideal for protecting you in Spring showers.

Riviera Cardigan, £65
Luxurious cardigan finished with a marine inspired stripe and an open waterfall neckline, making it the perfect wrap-up for Spring.

Let us know if you need anything else to promote MUSTO.

To celebrate our new Spring/ Summer 2013 collections, we're offering free delivery on all orders over £100/ €150 at musto.com*. 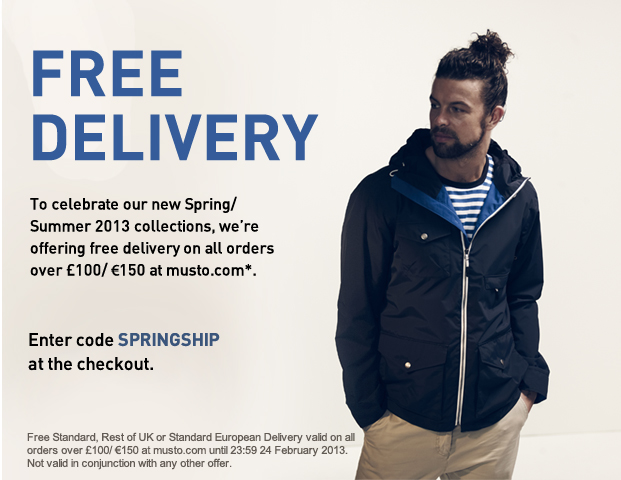 We’re offering an extra 10% off ALL sale items at musto.com from today until Thursday.  Enter code FINALTEN at the checkout. 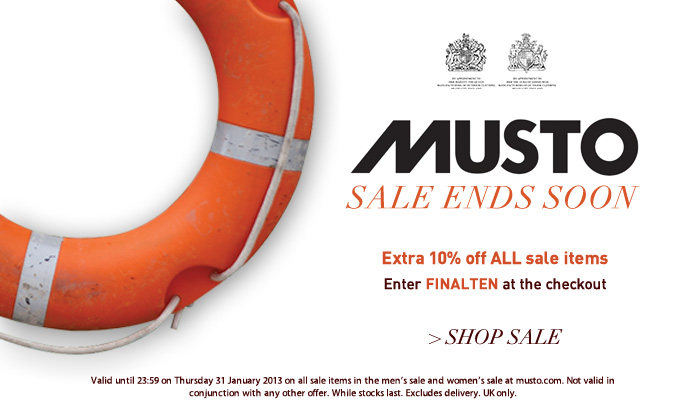 Valid until 23:59 on Thursday 31 January 2013 on all sale items in the men’s sale and women’s sale at musto.com. Not valid in conjunction with any other offer. While stocks last. Excludes delivery. UK only.

We’re now in the last few days of sale – let us know if you need anything else from us to help promote MUSTO.

We're offering free Standard UK Delivery on all orders over £100 at musto.com this weekend. 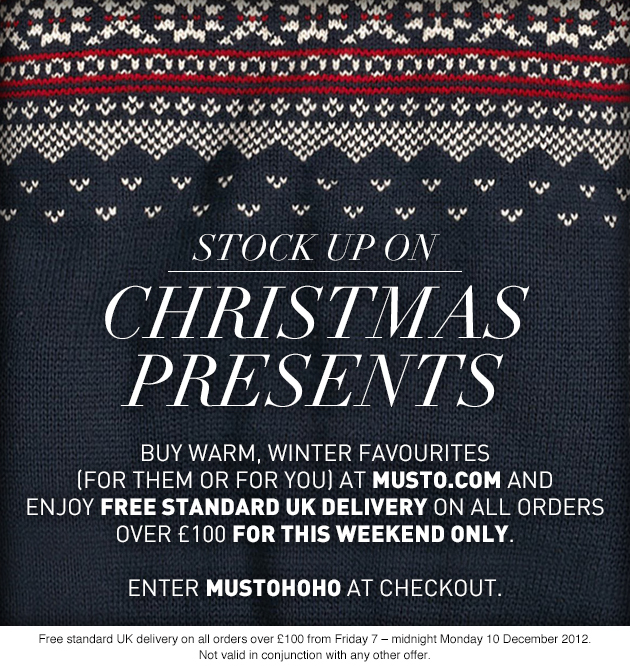 Enter MUSTOHOHO at the checkout.  Valid until midnight Monday 10 December 2012, not valid in conjunction with any other offer.

The discount code is now live, so promote away!

Let us know if you need anything else.