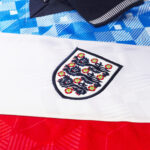 With the rescheduled EURO 2020 fast approaching and demand for official England and Scotland retro shirts and jackets growing significantly, as have conversion rates at 3Retro.com as the anticipation builds for both the #TheThreeLions and #TheTartanArmy.

In addition to the huge selection of existing retro classics available from the 70's to the 00's, we've also introduced the England #SD90 collection which includes the Mash up and Black out shirts which sold out within a few hours of launch. The shirts are now back on pre-order ready for the next drop of stock ahead of the tournament. Take a peek at the NEW collection here

We can provide competitive commission rates, decent average order values, high conversion rates, 10% OFF discount code to share, a 96% approval percentage and a pack of creative assets for you to utilise to ensure you capitalise on the upcoming EURO's. For any support please contact danny@3retro.com

We also have a huge range of Manchester City, Chelsea and Leicester City retro shirts if you'd like to take advantage of the end of season domestic and European cup finals. 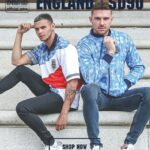 Thatcher’s dark shadow was cast over England in the Eighties. A bleak and desolate country. The Specials serenaded the decade with the haunting anthem, ‘Ghost Town’, to a backdrop of inner-city decay and industrial decline. The working class were conflicted between the sceptre of mass unemployment and the gratification of council house ownership. The North-South divide was a machete wound. The Soviet Empire aimed ICBM missiles at London. Babylon was burning.

Football attendances were at an all-time low, hooliganism blighted the terraces and the boardrooms asset-stripped the balance sheets. Stadia crumbled from the lack of investment and the finest talent was exported.

Never mind the revolution. Football was not even televised in 1985.

Out of darkness cometh light

From beneath the smouldering ashes a clandestine renaissance began energising the youth. The heaving masses were being nourished in the warehouses and fields of England. A popular and unrelenting uprising to the mesmeric beat of acid house…

The phoenix took flight from the embers with Pavarotti’s Nessun Dorma, New Order’s World in Motion and Italia ’90. Exiled on Sardinia, the England team had the greatest football shirt trilogy of all-time in their kitbag…

Score Draw, on behalf of the Football Association, will celebrate these three jerseys - the red, white and blue - on 23rd April, St George’s Day. A euphoric England 1990 Mash-Up shirt of original fabrics and embellishments.

Our design is inspired by the RAF target that adorned our Spitfires, emblematic of English guile and courage, and stylishly adopted by the Sixties Mods of Carnaby Street. We pay homage to the geometric patterns with our unique shard-like collage. Hand-sewn and embroidered with ‘the Three Lions’.

With the EURO's now just 50 days away, demand for #ThreeLions on the shirt is growing rapidly as the excitement builds. If you'd like to take advantage of our officially licensed England and Scotland retro collections please contact danny@3retro.com for more assets. 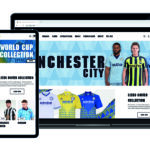 Since inception back in 2017, 3Retro Football has gone from strength to strength to become one of the market leaders in the world of retro football. The hard work of the 3R team and it's affiliates has really paid off with traffic levels increasing, expanding social reach and healthy sales growth year on year plus thousands of very satisfied customers.

Not to rest on our laurels we're committed to continue that growth and that's why we'll continue to invest in the 3Retro brand. With the EURO's fast approaching we thought it would be the opportune time to treat the brand to a face lift and give it a more modern feel.

We've also invested in our photography and creative assets to help bring our huge range of products to life on the updated website. The fresh look, combined with the introduction of the latest improvements in technology will help us to enhance the customer journey and improve the sales conversion rates for our affiliates.

We already have the biggest collection of officially licensed replica football shirts for club and country in the World but we'll continue to invest in our product ranges. Our NEW FIFA World Cup tees are the latest addition to our collection which launched last week.

You can also take advantage of the EURO 2021 hype that is building ahead of this summer's major tournament which includes England and Scotland which we have a fantastic range of official shirts and jackets to choose from.

Not to stop their we've also just launched our very own blog page The Hex which will includes lots of great content and engagement pieces from the 50's to the 00's for our fans to enjoy.

The Umbro diamond has been synonymous with football for nearly 100 years. Worn by the greatest teams and adorn by the best players in football history. Get 50% OFF the entire Umbro, choice of champions vintage sportswear collection whilst stocks last here https://www.3retro.com/outlet/sale-clothing/umbro-sale

Umbro retro shirts, track jackets, polo shirts & sweatshirts are all officially licensed. Available in a series of colours so you can show your support for your team, whilst staying stylish.

Take advantage of our Black Friday Deals with up to 50% OFF a select range of items within our outlet whilst stocks last!

At 3Retro.com we have huge range of officially licensed replica football shirts, jackets and sportswear for club and country. The perfect gift for any football fan this Christmas. 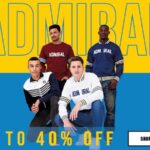 Founded in 1914, Admiral has played a huge part in football history which includes kit deals with England, Man Utd, Spurs, West Ham and Leeds to name just a few in the 70's, 80's and 90's.

The latest Admiral Sportwear collection takes it's inspiration from past designs, reworked retro in the form of stylish polo's, jumpers and track jackets starting from just £19!

Christmas has come early at 3Retro with up to 40% OFF whilst stocks last! SHOP the full collection here https://www.3retro.com/outlet/sale-clothing/admiral-sale

The Tartan Army are now on the road to EURO2020 where they will meet the auld enemy England, Croatia and the Czech Republic in the finals next summer. It will be their first tournament in over 22 years so demand to get kitted out in the official replica retro shirts will be huge.

To help celebrate we're offering 20% OFF the entire Scotland retro collection this weekend only. Conversion rates are extremely high and we have big stocks to sell through so good luck!

If you need any creative assets please don't hesitate to contact me on danny@3retro.com

Take advantage of our amazing 5 shirt offer at 3retro.com. Available from midday Friday until Sunday 2pm we have something for everyone. Whether its picking up a continental classic, a national treasure or a masterpiece from the champions, these 5 shirts have 50% off for a limited period at 3retro.com

With the vast majority of the population house bound and self isolating against the threat of coronavirus it's not a great time for mental health. The lack of football for many will also be adding further distress. To compensate fans for the lack of live action, TV broadcasters and social media outlets are going all retro, looking back and embracing the nostalgia of the beautiful game to help raise spirits for fans during these difficult times.

As many people reminisce about their footballing memories from yesteryear why not take advantage of this opportunity? Working with us at 3Retro.com we can offer you the following:-

For more information or to discuss the opportunities in more detail please contact Danny Taylor via email danny@3retro.com 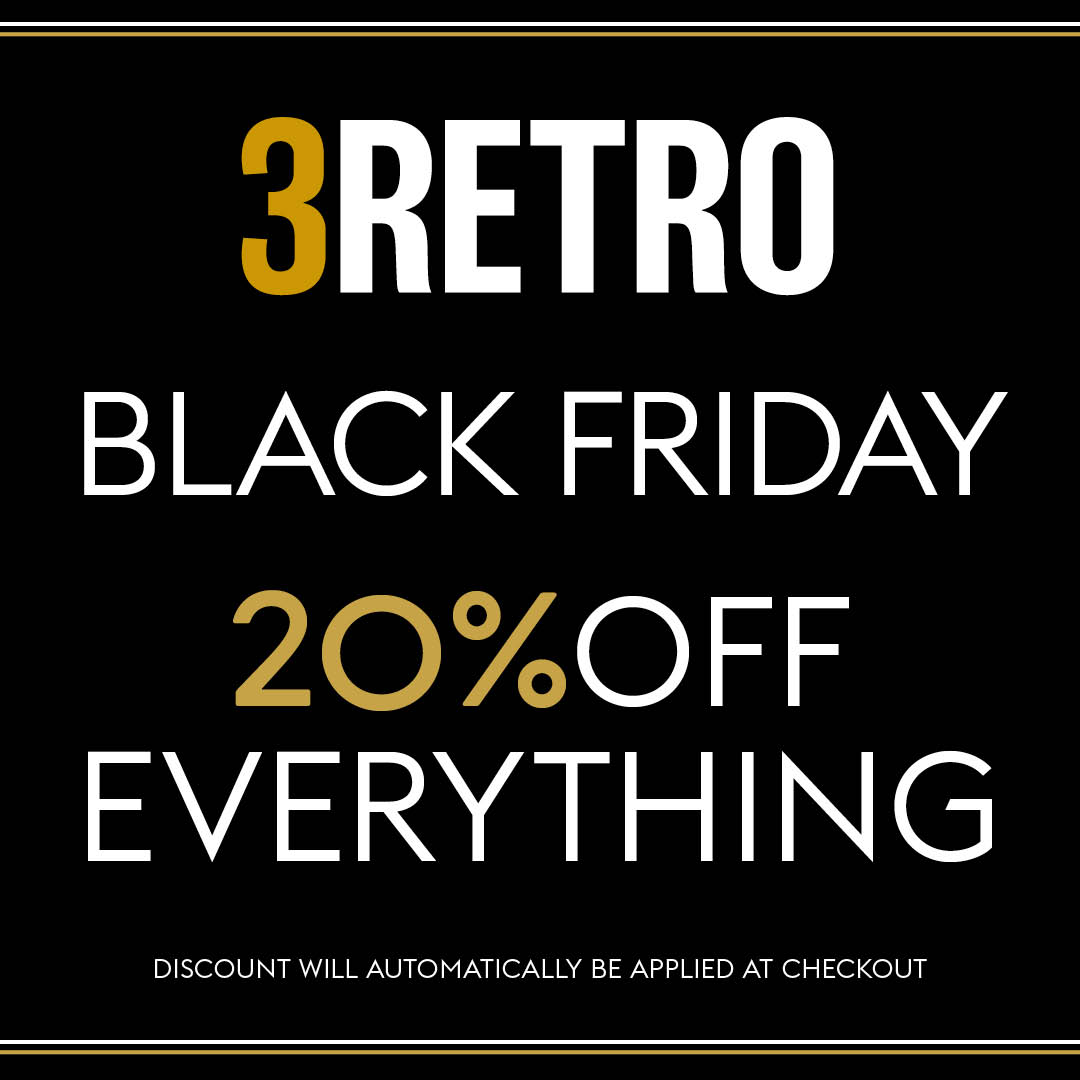 For BLACK FRIDAY only we're offering customers 20% OFF absolutely everything plus FREE UK delivery on all orders over £50!

No promotional gimmicks or inflated prices here at www.3retro.com just good old fashioned honest bargains to help bring some festive cheer. The discount will be automatically deducted at the basket so no code is needed.

We have a huge range of retro football shirts and jackets ranging from the 60's to the 00's, from club and country. We have something for every football fan!

With the World Cup now over, the football focus now heads to the new domestic football season and thus club related shirts.

It would be a great time to promote www.3retro.com and showcase the comprehensive range of official replica club shirts as a cost effective alternative to the latest season shirts. Not only are the retro shirts more stylish and in fashion they also offer great value at just £25 offering more longevity than the current season shirts which will be out of date in 9 months.

You can also share a 10% OFF discount code when you use 3RETRO10 at the checkout plus free UK delivery on orders over £50.

We have a huge range of retro football shirts to appeal to most football fans I'm sure our collection will generate some decent commission for you. If you need any specific creative please don't hesitate to ask?

With England in World Cup hysteria and fans scrambling to get kitted out for the final stages of the FIFA 2018 World Cup its a great time to work with 3Retro Football.

With a fantastic collection of England inspired replica shirts from Umbro to choose from all for just £25 a shirt. Feel free to share the discount code 3RETRO10 to offer your fans an additional 10% OFF everything whilst stocks last. 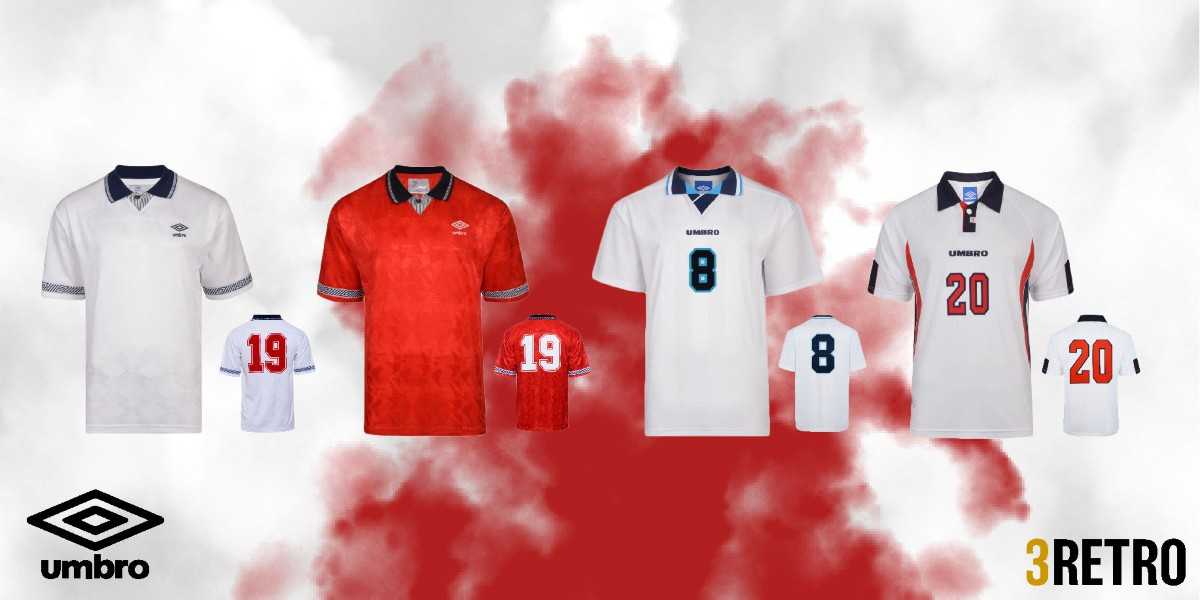 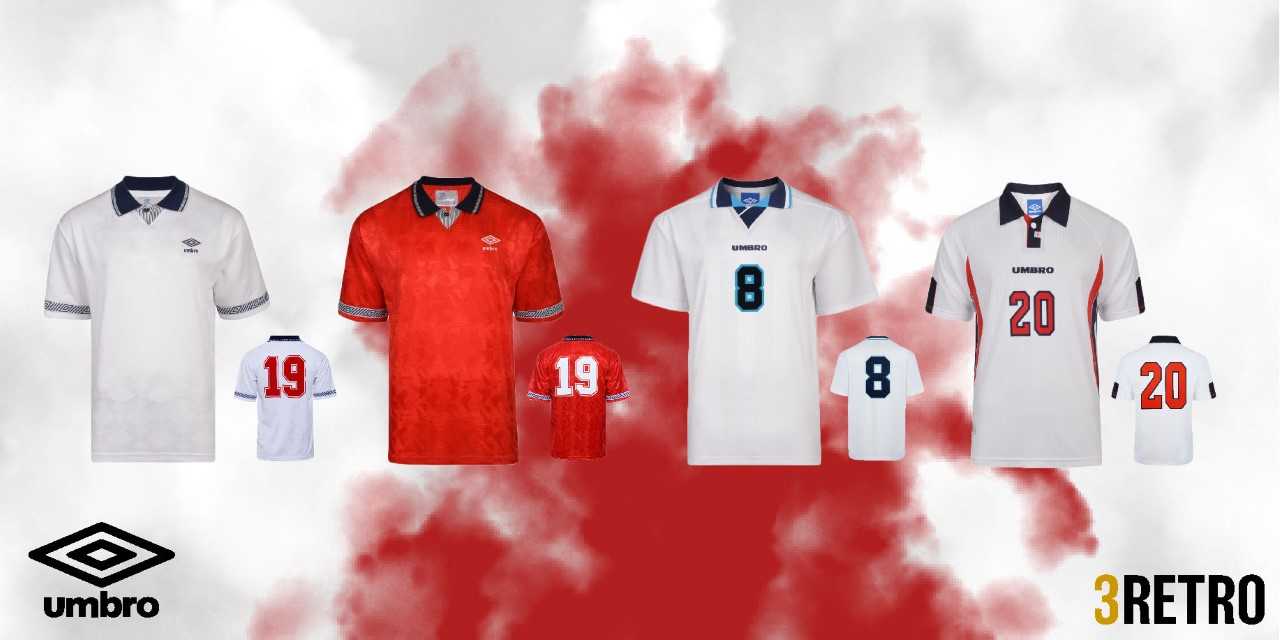 With 5 European Cups already under their belt, the famous Liverpool FC are on the crest of more European glory with a Champions League Final date with the Galacticos of Real Madrid on the 26th May.

At 3Retro we love our history and Liverpool FC have bags of that. We have a huge collection of officially licensed Liverpool FC shirts and jackets for you to share with your fans. Here is the link to the Liverpool shirts:- 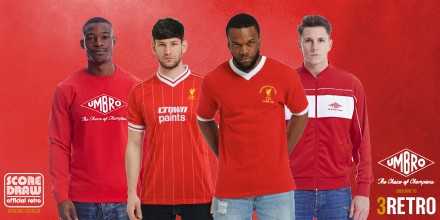 3Retro is your one stop for retro football shirts and vintage football clothing online. We ship worldwide and have a healthy conversion rate. You can also share promotional code '3RETRO10' to get 10% OFF everything.

With the football World Cup just around the corner it's a great time to promote our comprehensive range of officially licensed England shirts and jackets. We have a huge collection of items to suit any budget with shirts starting from just £25.

We have a healthy conversion rate of 3.5% and that will surely be higher whilst the World Cup hype build up. To help boost conversion further, feel free to share our 10% OFF everything discount code '3RETRO10' with your fans to help conversion. 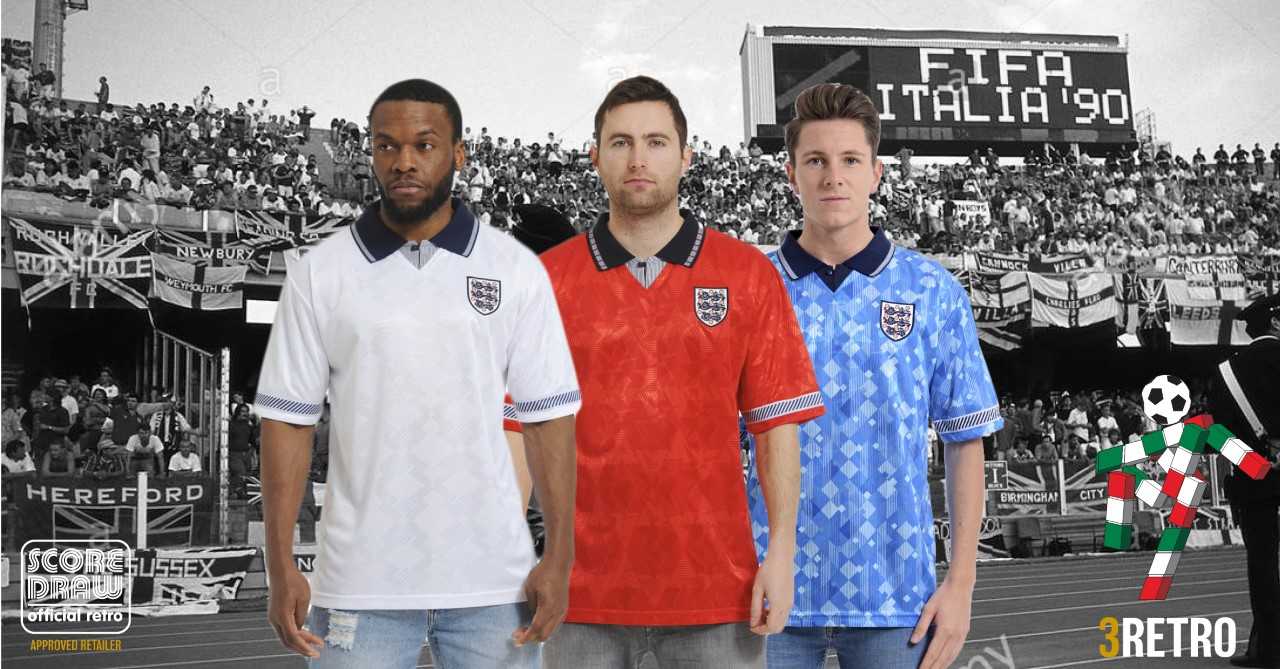 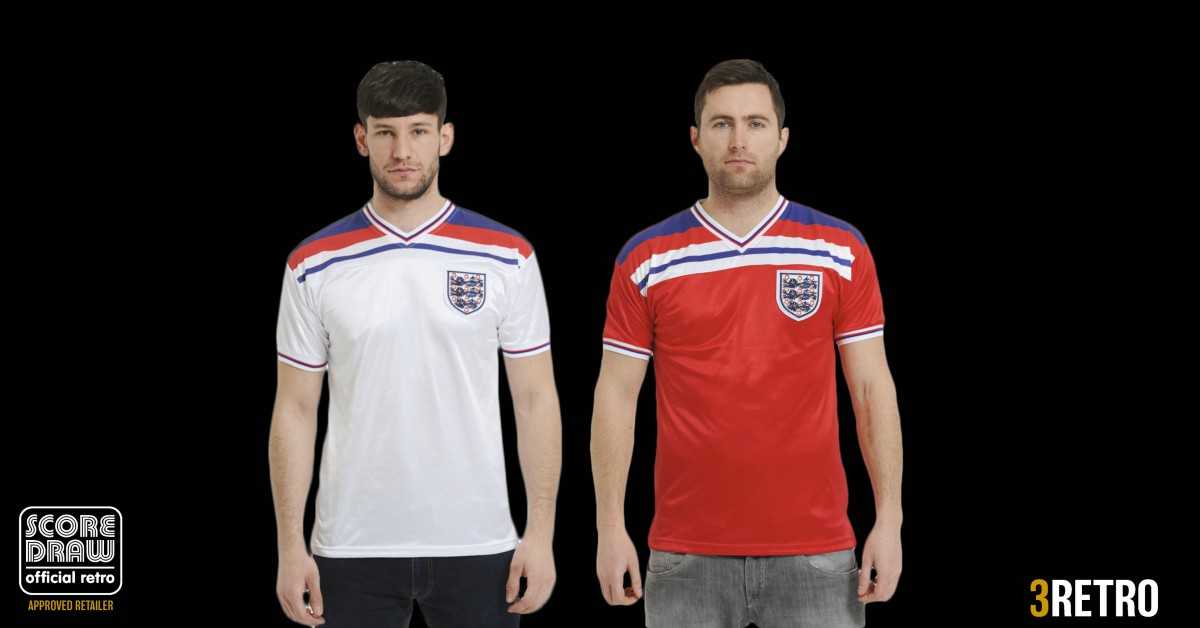 As the hype builds around the impending World Cup in Russia, take advantage of the impressive conversion rates (over 3%) at www.3retro.com and promote our huge range of official England retro inspired merchandise. With prices starting from just £25 it's the perfect time to help fans get kitted out for the summer tournament. You can also share our 10% OFF everything discount code 3RETRO10