Just in!!! We have this really special BLUE VINYL 12" single from Abba - only 50 were ever "issued" as private gifts.

ABBA Sång Till Görel (Genuine 1979 Swedish-only single-sided 45rpm Translucent Blue Vinyl 12" on the Polar label, pressed exclusively for Görel Hanser's private birthday bash. Görel was Anderson's personal assistant at Polar & close friend of the group to this day. The song was recorded by Abba & their manager, Stig Anderson at Polar Music Studios in Stockholm on June 9, 1979. Only 50 copies were "issued" on 21st June 1979, the date of Hanser's 30th birthday, with the catalogue number 'JUB30' hand scratched in the run out. The five-minute track is one of the rarest known Abba songs.

It has never seen a commercial release & was never supposed to. This extremely rare record was exclusive to Hanser's birthday ball & only given out to fifty party attendees i.e. you had to be a close friend or member of the family to get one. Needless to say, very few have escaped Abba's close inner circle - it simply never comes up for auction! The song features Björn & Benny on keyboards & banjo & Agnetha & Frida on vocals, as well as the golden throat of Stig, or "Stikkan" as he is credited on the label. According to Record Collector, the lyrics, if you understand Swedish, pay humorous tribute to Ms Hanser's organisational skill, & extend a flapping flared-trouser thank-you for all her tireless work on behalf of the group.

The vinyl grades Excellent & comes complete with the original custom die-cut title sleeve. The sleeve is near mint, & under a bright light, the vinyl reveals just a couple of ever so faint paper hairlines which have no effect on playback. The rarest of the rare for Abba collectors, only the most serious Abba collection will have it... JUB30). 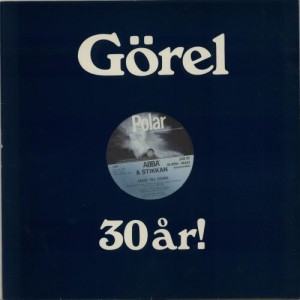 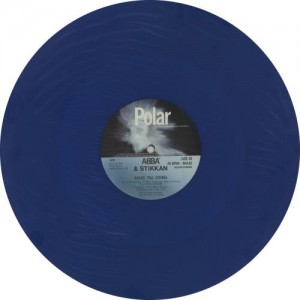